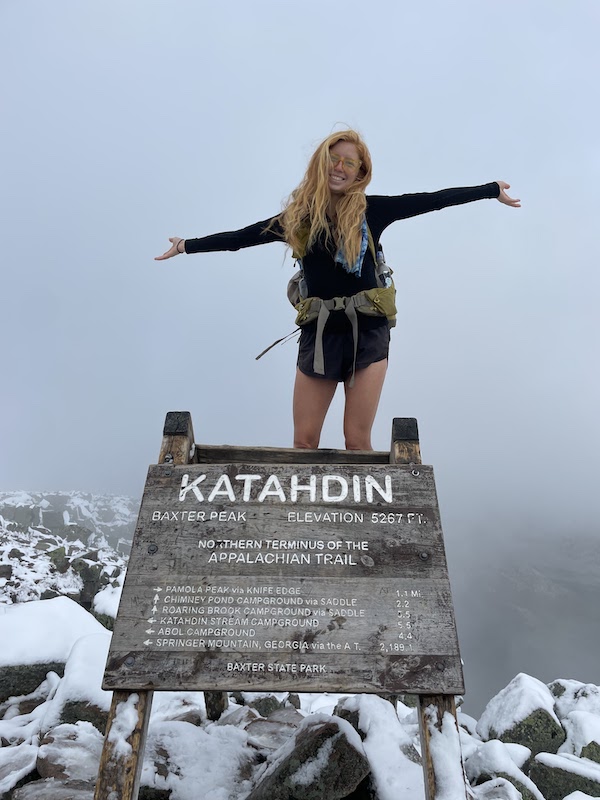 A Little Wild: How Priscilla Neville found lifelong friends, curious wildlife and a deep disgust for Froot Loops Pop-Tarts on the Appalachian Trail.

Special to CH2/CB2
It was nighttime on the Appalachian Trail, during a rocky stretch that pinballs between peaks of the Smoky Mountains. The towering Virginia pines held up a sky that was slowly bleeding inky black, and Priscilla Neville was cooking her dinner around a crackling fire. That was when she saw her first bear. “We looked up […] 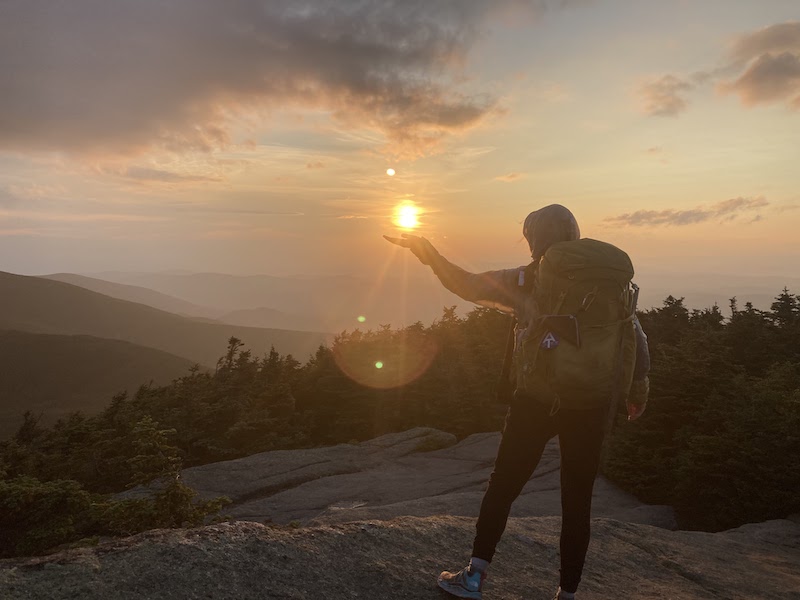 It was nighttime on the Appalachian Trail, during a rocky stretch that pinballs between peaks of the Smoky Mountains. The towering Virginia pines held up a sky that was slowly bleeding inky black, and Priscilla Neville was cooking her dinner around a crackling fire.

That was when she saw her first bear. “We looked up at the ridgeline, and we saw a momma bear and her three cubs. A few minutes later, they were right behind our tent,” she said. “So, we ended up packing up and leaving camp and walking two more miles because it was just a really sketchy situation. They were getting really close to our tents.”

It wouldn’t be her last ursine encounter on the trail. Further along, as the mountains begin the gradual slide toward the northeastern lowlands, she and her group would find a heart-wrenching scene as a bear discovered and attacked a baby deer huddled under a rock.

“One of my friends just started crying,” Neville said. “I didn’t even realize bears ate animals. I thought for the most part they ate berries and plants.”

But that breathless balance between unspeakable tragedy and awe-inspiring beauty is part of what makes hiking the Appalachian Trail a bucket list item for so many. 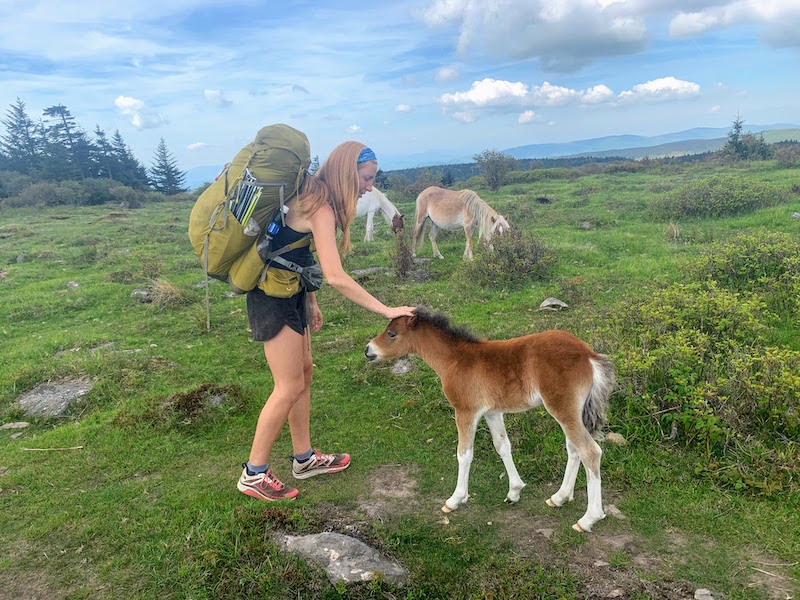 From the page to the trail

In 2012, author Cheryl Strayed released her memoir, Wild: From Lost to Found on the Pacific Crest Trail. After it was chosen for Oprah’s Book Club, it took a ride to the top of the best seller list and was eventually optioned for a movie starring Reese Witherspoon.

But more germane to our story, Strayed’s unflinching memoir of her time traversing the PCT served as an enormous inspiration for Neville.

“I was only on the first chapter, and I was like, ‘This is perfect.’ I’d just graduated in May of 2020, and while I’d been nannying, I hadn’t really started my career,” she said. “It was the perfect time.”

Undaunted by her lack of experience, Neville did a practice run on the Palmetto Trail just to make sure she was up to it. “I did one overnight just to see if I could make everything work and sleep in the woods without being scared to death. I didn’t sleep, but I figured I would figure out how to sleep,” she said. “(Strayed) had no experience, either.” 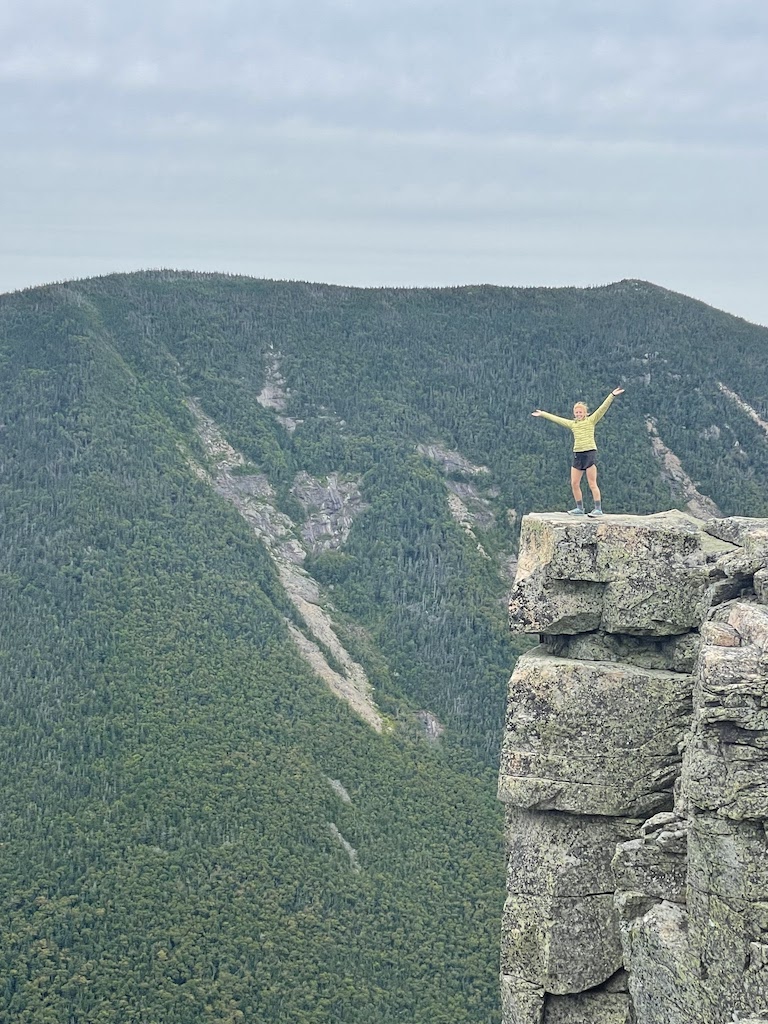 Life on the trail demands that anyone willing to take it on must also resign themselves to living simply. Spending days, sometimes weeks, far away from civilization in the heart of a mountainous forest means you eat only what you bring with you and dress and sleep in whatever fits on your back.

When Neville set off from the southern terminus of the Appalachian Trail at Georgia’s Springer Mountain, she brought with her just a tent, a sleeping bag, two outfits, and three pairs of socks. “Honestly, my pack weighed 30 pounds, but most of that weight was food,” she said.

You eat a lot more than you normally do, so you have to carry a lot of food, and that can be hard.”

This meant cereal with powdered milk for breakfast, or perhaps some oatmeal (“I just got tired of that,” she said). For lunch, a block of cheese when it was cold enough to not spoil in her pack, avocados, bell peppers and maybe a packet of chicken or tuna for protein. “Tuna definitely got old really quick,” she said. “I ate it for two weeks straight, and I can never eat tuna again.”

Dehydrated Knorr sides turned out to be a staple, but there was one item that sustained Neville through even the harshest days. “I became addicted to Pop-Tarts, which is horrible because I studied nutrition in college and I’m out there eating candy and Pop-Tarts every day,” she said. “But you’re still hungry, and you need sugar and fast calories in your blood.”

She even became a connoisseur of sorts. After all, it’s not just about survival. “I’d eat the strawberry ones, just the basics,” she said. “I did try the Froot Loops Pop-Tart and they were absolutely disgusting.” 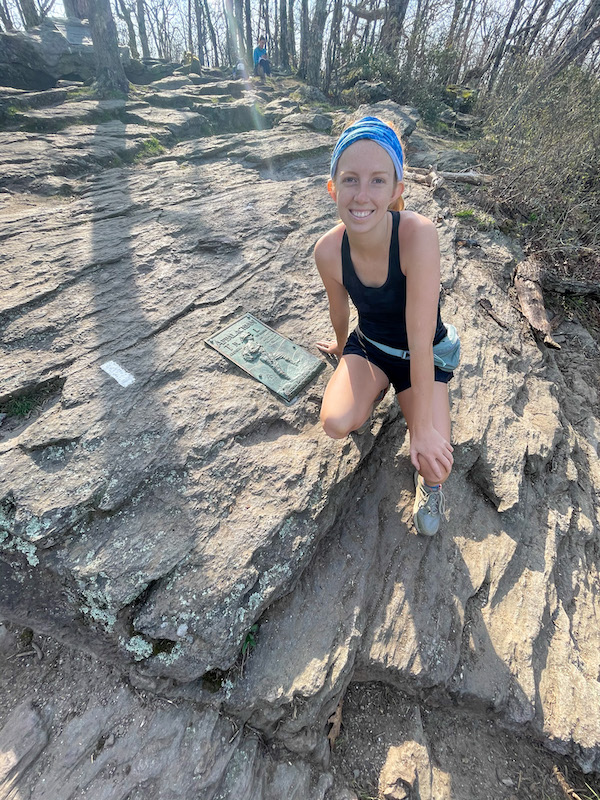 Of course, humans need far more than just food and water to survive. We need companionship, and Neville found that in spades along the trail. “The first day, I probably met 6-7 people; the second day at the shelter, there were 10-15 people. You get in little bubbles and form a ‘tramily,’” she said. “That’s what they call your trail family. I had a tramily for the first half of the trail, and then I kind of separated and started doing stuff on my own.”

These loosely affiliated tribes are part of the Appalachian Trail experience. You’ll meet people along the way, and since you’re all headed in the same direction, over time you’ll just sort of gel. You share shelters, you share food, and you share your lives, even if only for this brief moment. And when it’s time to say farewell, most of the time you depart as newfound friends.

“There’s some kind of intimacy on the trail; you get to know them so much quicker than you would in real life,” Neville said. “Maybe it’s the vulnerability of being out in the wildernesses, but a day is like a week. You trust people pretty quickly out there.”

And these are not just casual flings of deep-seated friendship. Neville says that, even months after leaving the trail, she keeps in touch. “I met my friend—her name is Feathers—in New Hampshire, and we ended up becoming best friends. We just vibed really well together,” Neville said. “She lives in Nashville, and we’ve talked about moving in together somewhere different for both of us.”

It’s a uniquely instant connection that you’ll find in few places other than the wilderness. “That’s the community; you meet people and get to know them immediately,” Neville continued. “I’m a people person, so it was really cool to meet so many different people from all over the world.”

From Georgia to Maine, with a slight detour

As the Appalachian Trail winds 2,190 miles through 14 states, it offers thru-hikers the chance to experience four different seasons in the span of a six-month journey. At the beginning of her journey, the leaves hadn’t yet grown back in the Georgia woods, allowing brisk mountain air and sunshine to take center stage. As the trail ascended into Virginia, spring wildflowers lined the trail. And atop Clingmans Dome, the bountiful Fraser Firs filled the air with the scent of Christmas.

“It was nice there in the middle range in West Virginia and New Jersey. There are a couple of different states that were relatively flat, but you were just walking on rocks all the time,” Neville said. “It was nice to have the changes in the trail. The mountains are bigger than you’d think in Maine and New Hampshire. It was a hard trail, but it was beautiful.”

It was at the part of the trail considered the most difficult, where it winds through the White Mountains of New Hampshire, that Neville took a well-deserved break from the hiker trash lifestyle. Her friend was getting married, and there was a bachelorette party in Key West that she couldn’t miss.

“I got off right before the hardest part of the trail, so when I got back on … there had been a lot of drinking at the bachelorette party. It was some of the hardest mountains I’ve had to climb,” she said. “It was a big switch, but nice because I’d been wearing the same outfit for five months. It was fun to put on makeup and a cute outfit. Being a wilderness woman so long, it was nice to be a girl for a while.”

Nevertheless, she persisted along the trail until finally, after more than six months of a journey that started in the Georgia foothills, she arrived at Maine’s Baxter State Park.

“My mom and sisters came and picked me up and went to Acadia near Bar Harbor. I was honestly so tired,” Neville said. “I was on such a high from being on the trail, but then saying goodbye to friends, I was on a low. Acadia was beautiful, but I was just done.”

Neville had packed a lot of living into those six months, with the same care she had packed her tent, sleeping bag and Pop-Tarts. And every step of those thousands of miles was worth the effort.

“I feel really accomplished, but it was such a great experience, I don’t feel super proud, I just wish it was longer,” she said. And to anyone who might want to follow in her footsteps? “Just do it. There’s nothing holding you back. You just have to get the gear and get out there and give it a go. It’s definitely not as hard as it sounds. You just take one step at a time.”

END_OF_DOCUMENT_TOKEN_TO_BE_REPLACED

2022 Realtors of the Lowcountry

END_OF_DOCUMENT_TOKEN_TO_BE_REPLACED

A farmer, by definition, grows things. They put a seed in the ground and monitor its rainfall, its nutrition, the composition of the soil around it, its sunlight and its overall health to ensure a good yield. It’s part faith, part science. It’s hoping that the clouds...