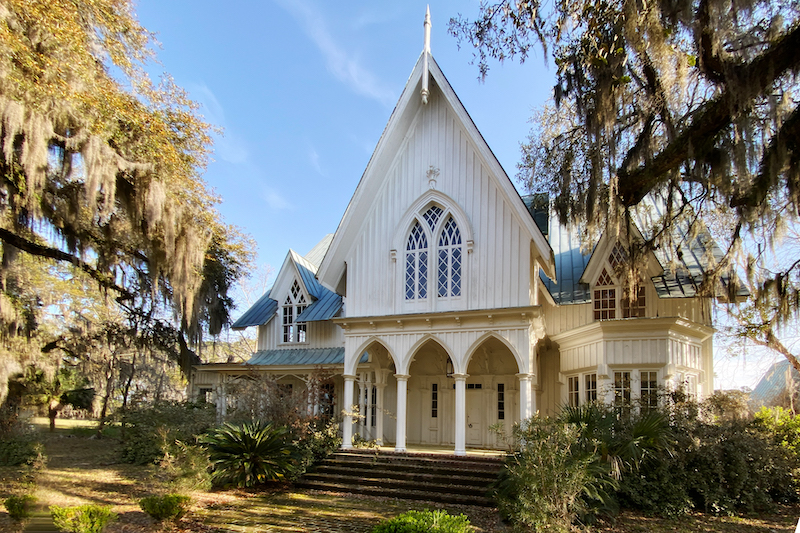 Wilting Rose: Questions hover around the future of a historic mansion that has been a part of Bluffton’s history for centuries.

Special to CH2/CB2 Magazine
In many ways, the history of Rose Hill Mansion is the history of Bluffton itself. Resting at the center of what once was a thriving plantation, it was built by Dr. John Kirk, whose family name informed Bluffton’s original moniker, “Kirk’s Bluff.” It housed northern soldiers, whose torches spared the house even as they burned […]

In many ways, the history of Rose Hill Mansion is the history of Bluffton itself. Resting at the center of what once was a thriving plantation, it was built by Dr. John Kirk, whose family name informed Bluffton’s original moniker, “Kirk’s Bluff.” It housed northern soldiers, whose torches spared the house even as they burned the rest of the town to cinders. Its hollowed-out shell sheltered squatters during the great depression. It enjoyed post-war prosperity under the stewardship of the Sturgeon family. It anchored a lavish new housing development during Bluffton’s development boom.

It has weathered all of this with the same stately grace that has enchanted visitors for centuries. But unless something is done, and soon, it may not weather its current sad circumstances.

“I’m worried about it day to day. If we don’t get air conditioning in it … mildew will set in and just rot,” said Iva Welton, long-time local historian and more than likely the ultimate living authority on the house. “That’s what scares me to death. Please let the air conditioning be turned on tomorrow. If I had the money, I’d be over there mowing the grass right now.”

As it stands now, it’s hard to recognize the Rose Hill Mansion that has been an icon of Bluffton’s Southern charm and grace for so long. After its latest owners were forced to abandon the property (depending on who you believe, sneaking out in the dead of night) it has sat vacant, exposed to the moisture and salt air it has held at bay for so long.

Its current legal status is one that has become all-too common in recent years, with ownership lost in the byzantine realm of national banking. Abandoned since 2019 and finally placed up for auction this past April, it fell into the hands of US Bank as a trustee, which has been confirmed by the bank’s law firm. Representatives for the bank itself did not respond to requests for information, meaning as of this moment, the fate of the house is unknown.

And with plaster already starting to peel on the ceiling of the once-grand front parlor, and flecks of paint already piling in the majestic foyer, the clock is ticking.

“It is a national registered site. They should have some ownership of what they have there,” Welton said. “If somebody doesn’t do something soon…”

Fortunately, not all hope is lost.

“The other day I saw a cleaning crew hired by the bank, or they said they were hired by the bank, in preparation for putting it on the market,” said Rose Hill resident Nancy McGregor. “They were supposed to go in clean stuff out, then go 15 feet around the perimeter and mow it and put a lock box on the front door. Now it’s just waiting until it goes on MLS.”

Along with a handful of other residents, McGregor has been working diligently to ensure this historic mansion doesn’t fall into disrepair. Calling themselves The Friends of Rose Hill Plantation, they set up a website, rhp21.com, and began pressuring Rose Hill’s POA to step in and save the house.

They were met with immediate resistance. “The more that I talked to the POA, the more I kept getting smacked in the face. I don’t know how many times I was told it’s a money pit. It’s not a money pit; I was in it,” McGregor said. “One board member told me they couldn’t afford it. They extended themselves for the golf course and other repairs.”

In its official response, the first reason given by the POA revolves around the uncertainty of the house’s physical structure itself. “…We really have no idea what condition the house is in—not just the plaster and trim, but the ‘bones,’ the plumbing, electrical, foundation, framing, etc.,” wrote Rose Hill’s POA board in a letter to McGregor. “We have no idea what it would take to bring it up to CO level, ADA compliance, lead abatement, etc. Purchasing the house could be the least expensive part of owning it.”

McGregor disagrees. “I took my builder through; he’s built three houses for us over the years. He said there’s very little wrong with it, but the new owner would need to spend the money to clean out the duct system, depending on how the heating and air systems work,” she said. While she acknowledges the peeling plaster and mildew, “other than those things, the house is in really good shape for having sat for a year and a half,” she said.

As for the rest of the reasons given by the POA, they were all financial in nature. The community’s bylaws prevent it from owning a business, so they would need to hire a management company. Plus, banks would be hesitant to loan them money given the uncertain nature of the house’s upkeep. For a board already dealing with ongoing fallout from its former golf club owner’s legal problems, it just isn’t the right time.

So, The Friends of Rose Hill Plantation decided they would just have to do it themselves. “What we thought we’d do is put together a group of people who would like to save this property,” McGregor said. “To create a board, nonprofit, syndicate or whatever to go in together and save it, protect it and turn it into business. The goal is to keep this from ever happening.”

Leading the charge is Rose Hill resident Frank DeLuca. “I really wanted Rose Hill to buy it … but it looks like that’s not going to happen,” he said. “The next best thing would be to find some people in here with some money to purchase it and bring it in-house.”

At press time, DeLuca was still approaching fellow residents to try and build his coalition. “We’re the ones who know the history of it and have been there, done the tours and met the previous owners,” he said. “I’m not comfortable with someone from out of town purchasing this place and giving homeowners no say so.”

Plans are still very much in flux. Among the options on the table are using it as a wedding venue or as a bed and breakfast, letting it generate revenue and insulating it from future abandonment. But no matter what comes out of the collective purchase by homeowners, should it happen, DeLuca wants to make sure Rose Hill’s homeowners are part of the conversation. “I’ve already informed the neighbors they will be participants as we come up with ideas. I don’t want to tread on anyone’s driveway,” he said. “This is heaven to me. That’s how I want to keep it.”

The future of Rose Hill is up in the air. The best-case scenario for some is a family moving in and continuing a legacy that stretches back centuries. For some, the goal is to see Rose Hill earn its place as a thriving commercial venture.
But the absolute worst-case scenario, the one everyone involved is working to avoid, is one where the house that survived Yankee torches, Great Depression squatters and a structure fire finally falls into ruin.

“It’s sacrilege to treat something this beautiful like this,” McGregor said. “Just abandoning it to rot, it’s morally wrong.”