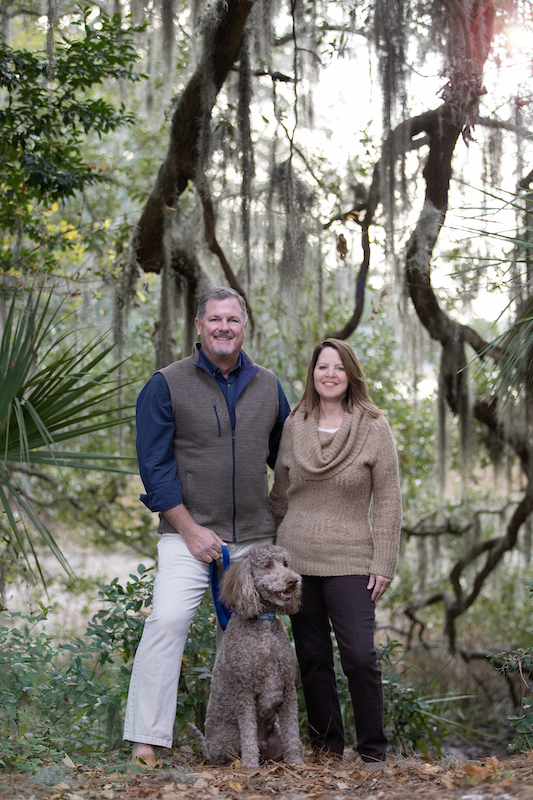 “We Fell in Love Here for a Reason”

Alan and Kathy Perry have been a part of our community’s fabric for decades. As Alan is sworn in as mayor, we introduce you to a couple that you most likely already know.

Since its incorporation as a town in 1983, there’s one thing that Hilton Head Island hasn’t had—namely, a mayor who knows what it’s like to grow up here. There have been mayors here with strong local ties, to be sure. Tom Peeples was raised in Ridgeland and spent a good chunk of his youth here before moving to the island full time. His youth, however, came before the bridges. Before Charles Fraser. No one has seen the growth like Alan Perry has.

“All the things Charles Fraser talked about is what I grew up with,” Perry said. “We’d see them (the Frasers) every day, and they would remind us why we’re here. It was always about enjoying this beautiful place.”

Perry recalls what it was like back in the days when stars littered the sky at night—before enough holes had been poked in the lighting ordinance to outshine them. “When you look at the developmental history of Hilton Head Island, I feel like we’ve lost a little bit of that character,” he said.

He speaks with authority. His father, Charles Perry, was perhaps most visible for his role at the RBC Heritage as hole announcer. But beyond that, he left an indelible mark on the island as a champion for parks and a driving force behind the Island Rec Center.

But the Perrys weren’t the only movers and shakers on the island back then. “Both of our families instilled in us a desire to make the community a better place,” said Perry’s wife Kathy. “My father was the first paid firefighter in Sea Pines, and I grew up volunteering for all sorts of things.”

If you were around in those days, you know that in the island’s earliest days, everyone knew everyone. Despite going to different schools and running in different social circles, Alan and Kathy weren’t the exception. 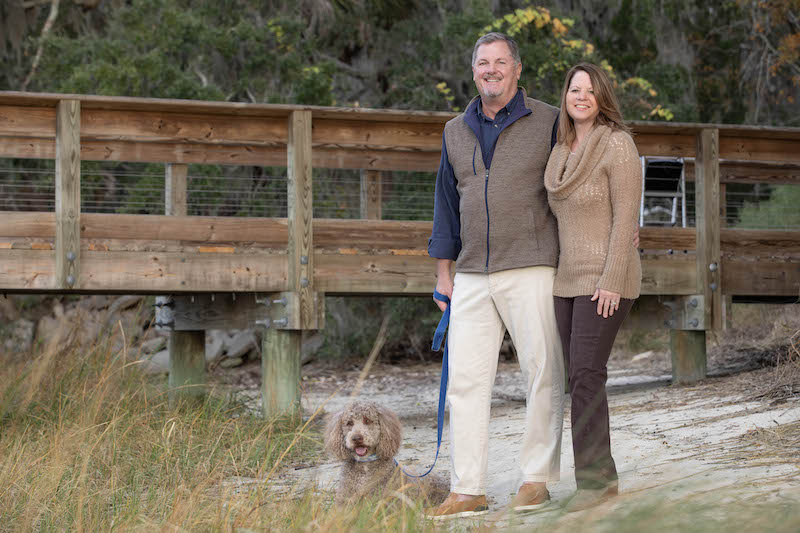 “We’ve known each other since the 1970s, because our dads were both involved in a lot of community volunteering together,” Perry said. Even so, it couldn’t exactly be called love at first sight.

“He was younger than me, and I thought he was cute, kind and sweet, but I didn’t really think of him that way,” Kathy said. She left the island for a time, moving to Atlanta until a chance meeting brought them back together. “We reconnected by a fluke. I was visiting high school friends, and we just happened to meet at Skull Creek Boathouse.”

The pair hit it off as if a single day hadn’t passed and were more or less inseparable from then on. They tied the knot in 2017.

“We’ve been volunteering together for the last few years, so [when he announced he was running for mayor], I was excited that Alan was interested in taking his role in the community to the next level,” Kathy said.

If anything, the election merely codified Perry’s role as a leader in our community. Beyond his long-time role as a senior lender with Movement Mortgage (formerly Mortgage Network), he has served as vice chair for the planning commission, chair for the St. Patrick’s Day Parade and RBC Heritage, fundraising chair for People for Parks and board member for alumni of Hilton Head Prep (where, ironically, he was voted “Most Likely to Be Mayor” by his senior class).

“I’ve been in plenty of leadership roles, and it’s about bringing something to the table. You give back to the community. You give back, period,” Perry said. “When I was working on the Rec Center, I realized that bureaucracy tends to get in the way of moving things forward. When it was approved to move forward, that was great, but I saw that the island needs different leadership.”

So, what exactly will this different kind of leadership look like?

“If council buys in, we’ll create more transparency so the public can see what we’re doing,” Perry said. “We just did a team-building event with council. Since we have four existing members and three new members, we have to feel out how we’re going to work together. We’re all pretty closely aligned in our thought processes. Getting to our goals is going to be a challenge, but that’s where communication comes in.”

That transparency is just one of the issues facing the island, outlined in Perry’s mayoral platform. He aims to create a voting dashboard on the town website so citizens can see which way every member of council and the mayor vote on important issues. His work with the town’s PPI committee underscored our susceptibility to flooding, something he will look to address through an update to the town’s LMO. He’ll continue work on a community development corporation for the island. And of course, he’ll carry on his father’s legacy as a champion of island recreation.

“We’ve been very reactive in some of our policies, and we need to be more proactive,” he said. “And one of the most important things to tackle is the housing issue.”

As many will tell you, the opportunity to be proactive on housing passed years ago. Even though as a town we’re playing from behind, Perry is confident the needle is moving in the right direction. “There is a lot of power behind that right now and a lot of desire to fix it,” he said. “We have to continue to push forward.”

It’s going to take a lot of work. But really, it simply continues what Alan and Kathy Perry have been doing for years: working hard to make the community a better place to live and returning it to some of that fragile beauty they both remember from their youth.

Said Kathy, “We fell in love here for a reason.”

END_OF_DOCUMENT_TOKEN_TO_BE_REPLACED

Coping with Stress When You Can’t Change the Situation

“The more you try to control everything around you, the more anxious you’ll be.” Sage words from the therapist I saw in college, and I wasn’t having any of it. It was a cold-water-to-the-face moment. Was he suggesting that I give up? If I don’t try to control my...