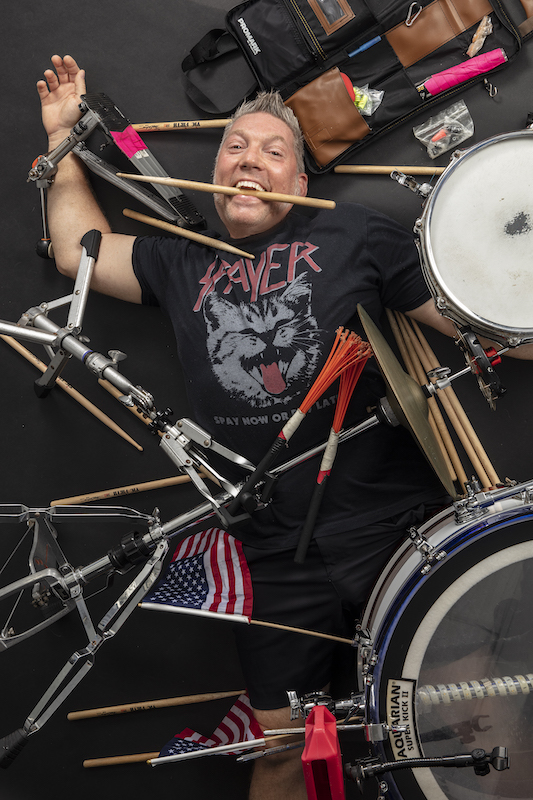 The Beat Goes On: Saluting the oft-unsung glue that holds together any great band – the drummer.

M.KAT Photography
You can stop with the drummer jokes now. They’ve heard them all. “How can you tell that the drum riser is level? Because the drool is coming out both sides of the drummers mouth.” “What’s the hole in the guitar for? To hold snacks for the drummer.” Perpetually put upon as either the wild man […] 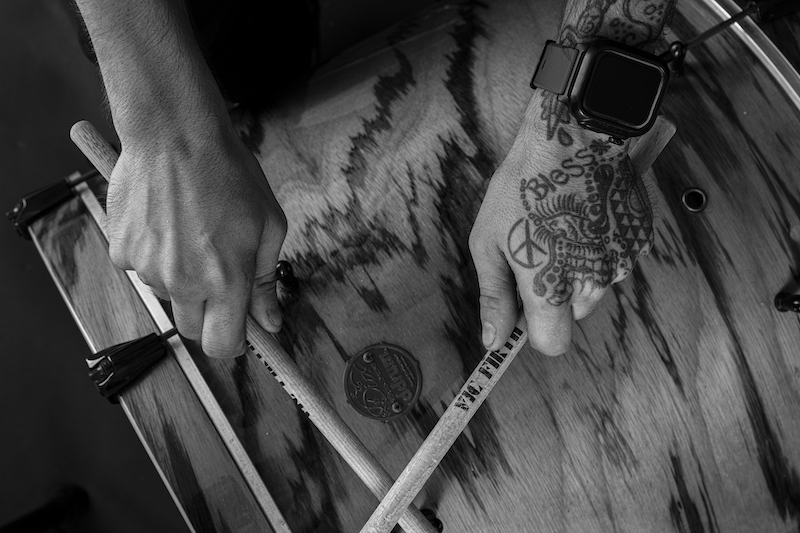 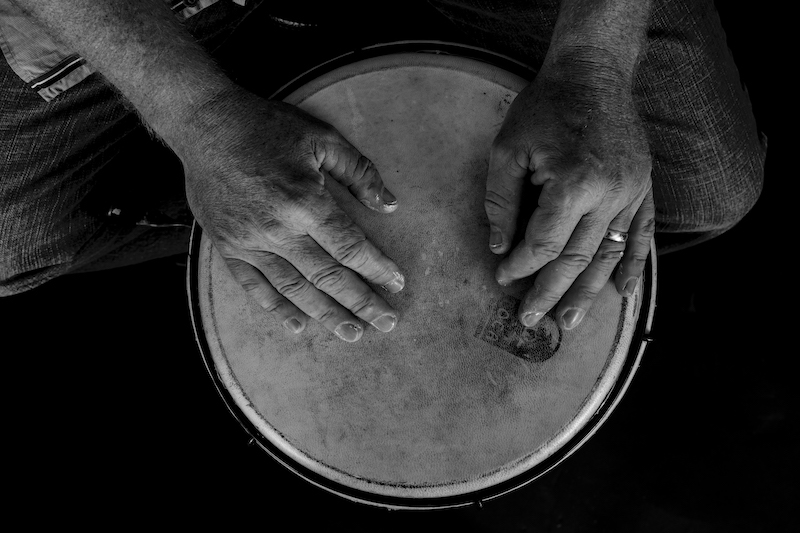 You can stop with the drummer jokes now. They’ve heard them all.

“How can you tell that the drum riser is level? Because the drool is coming out both sides of the drummers mouth.”

“What’s the hole in the guitar for? To hold snacks for the drummer.”

Perpetually put upon as either the wild man of the group, the lazy one, or the perpetually wasted one, perhaps no musician is more of a punching bag than the drummer. Fortunately, they have thick skins. (That last joke, appropriately enough, should have just made you hear a rimshot in your head).

“I don’t honestly think about it,” said drummer Chip Larkby, of Silicone Sister and Cornbred, among others. “But I do know that it’s hard to go somewhere and see people dancing without having a drummer.”

It’s an interesting dichotomy. While there is almost universal respect for guitar players, drummers only seem to draw attention when they are either supernaturally talented or distractingly bad. But maybe being just off to the side of the spotlight is the way drummers like it.

“We don’t seem to be as competitive as guitar players,” said Mark Husbands, long-time local drummer in all sorts of lineups. “We all get along. We’re the brotherhood. We’re the underdogs.” 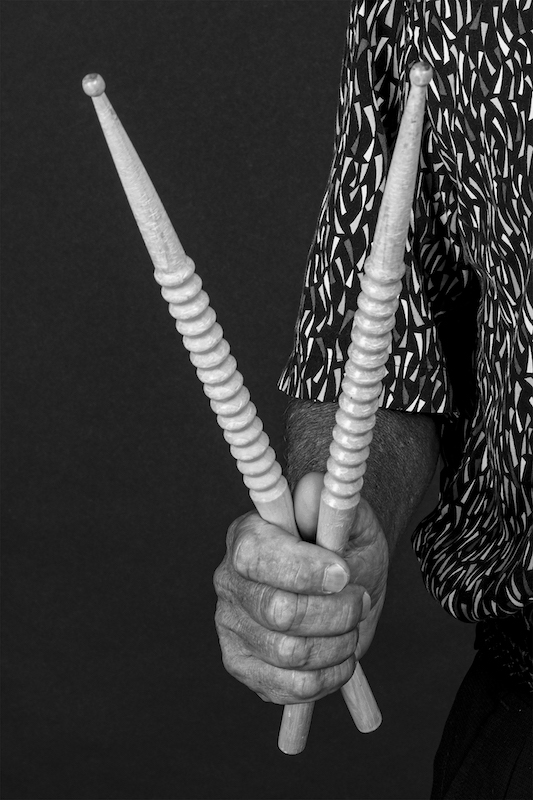 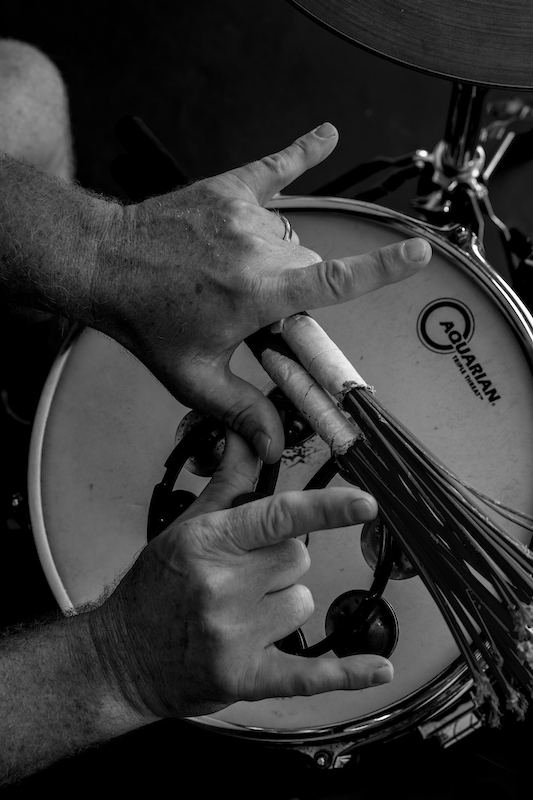 “First in line for verbal abuse is the drummer,” said John Ruxton with a laugh. “It’s definitely not deserved, but I think it’s because of our separation from actual musical notes that we’re put into the back of the bus. But then you look at guys like Greg Critchley, who is this multi-instrumentalist, I think our gift is much more than time keeping and dynamics.”

As a multi-instrumentalist, Critchley has a unique perspective on drummers. He’s been there behind the kit with bands like Soundboy, driving the bus. He’s also been in the studio trying to get the best sound possible out of drummers.

“Drums can enhance and ruin a song. I’ve been in a position to produce other drummers and it can be frustrating to get them to do what you want. I both am one and can see objectively,” he said. Judging from the outside and the inside, he doesn’t see drummers as any one stereotype. “Drummers play like their personality. If you’re a chill, even-keeled, solid dude people are going to hire you. If you’re a crazy guy … that’s what you’re going to get.”

“I’m just doing my own thing, but I get it. I’ve been called ‘Animal’ plenty of times,” he said, referring to the Muppets’ resident loose cannon. “I think it’s like Harry Potter, where the wand chooses the wizard. The drums choose the crazy person.” 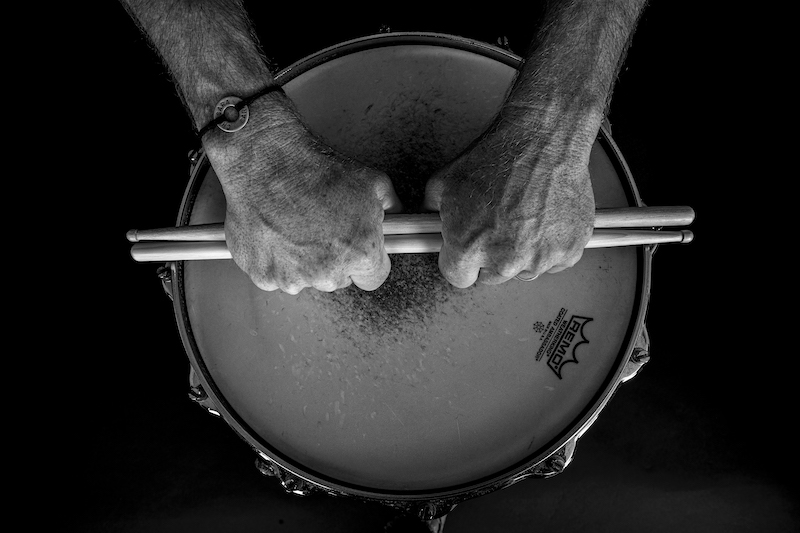 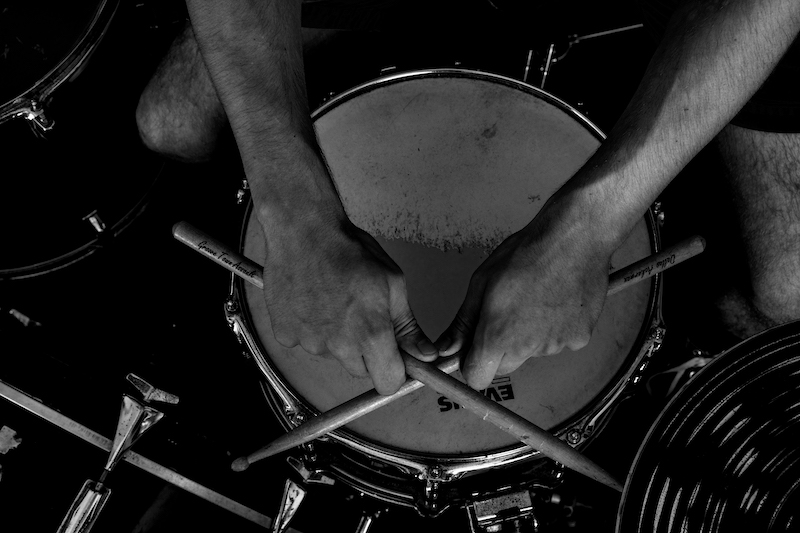 But despite owning the stereotype to some extent, Ackerman also embodies another stereotype of drummers: get him on stage and you’ll see the wild man become all business. “To me, it’s more fun to figure it out. It’s time and space and a puzzle. Wherever everything goes, you have to figure it out and put it into a line of four measures.”

There is, in fact, something greatly cerebral about drummers. They may not have to think in scales and chords like their musical brethren, but aligning your thinking towards time, physical movement and musical dynamics can be equally taxing.

“I like dynamics. You can be a soft side stick; you can even drop out of part of a song and not play at all. That’s what a good drummer does, having that dynamic to play with the song and not just play the song,” added Nate Douglas. Trained up in the high school jazz band and Drum Corps International, his is a highly analytical approach. “I’m always thinking two measures ahead, especially when I’m playing with someone new. As long as you don’t stop, no one knows you messed up.”

One thing drummers are is supportive of one another. And when you ask the local drummers about some of their favorites, one name that comes up again and again is Chris Russell. Like so many of his fellow drummers, he delights in adapting to different styles, whether it’s the Latin percussion and jazz fusion he played studying in New York to the multitude of bands he’s played with over the last quarter-century here in the Lowcountry.

“It does break up the monotony,” he said. “I like to sit in with good players and good musicians. It’s fun to sit with some guys where I’m doing my part and we’re having a musical conversation.”

And he knows the fundamental truth about drummers, a sentiment shared by nearly everyone we spoke with. “A great drummer can make a bad band sound good, and a bad drummer make great band terrible.”

Make all the jokes you want. Perpetuate whatever stereotypes come to mind. At the end of the day, they may be at the back of the bus, but when it’s time to dance, they’re the ones driving it. And without them, the song just would be the same.

Style: Neutral. “I’m vanilla. I don’t have amazing metal or jazz chops, but I can play almost any popular song.”

Thoughts on the importance of a bass drum: “Nobody dances to the snare drum.” 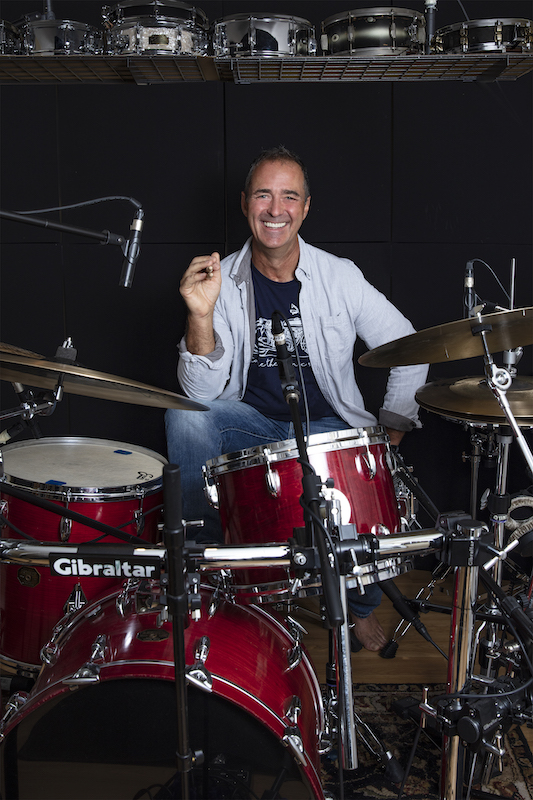 Style: Technically sound, but with soul

Thoughts on his job description: “I stretch animal skins across hollowed out logs to facilitate mating in primates.” 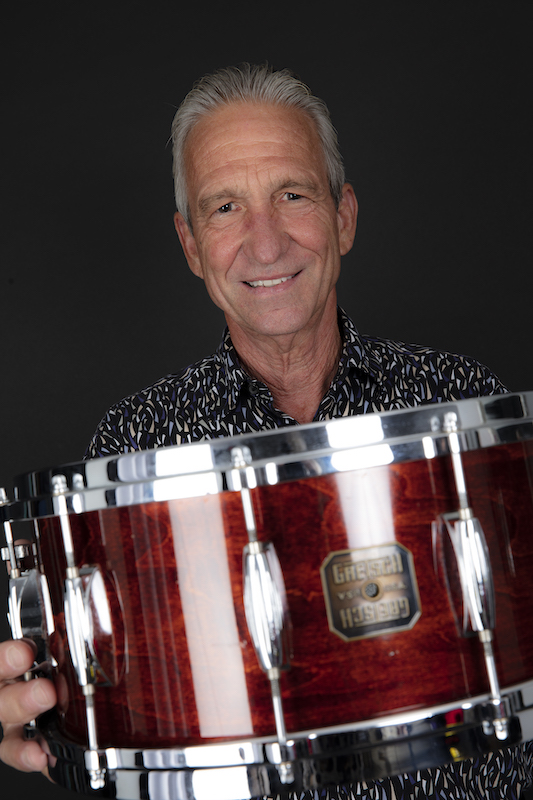 Style: Dance, with a little jazz and Latin thrown in for good measure

Origin story: “I started drumming in 1966 when I was 11 and got my first drum set for Christmas. It came from Sears and Roebuck. I was too small to play football, so I had to find something to do.” 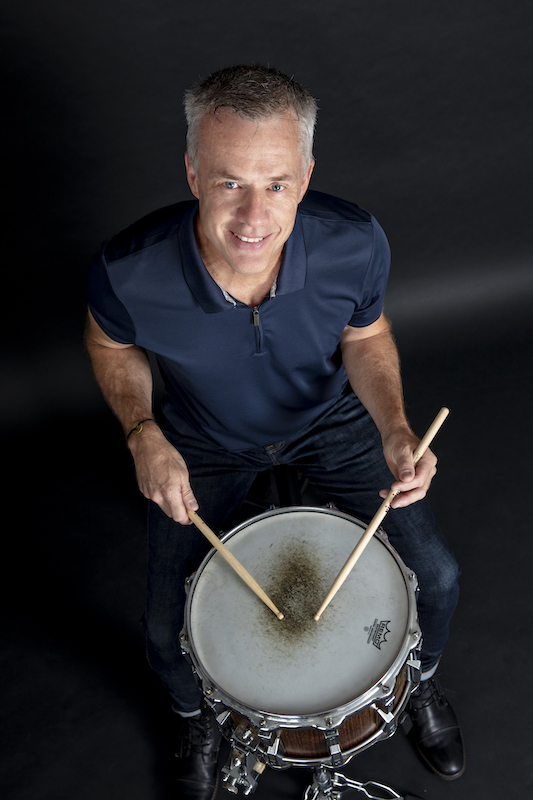 Style: You name it.

Thoughts on fame: “I’ve never been much for the spotlight. I’m definitely more Charlie Watts than Keith Moon.” 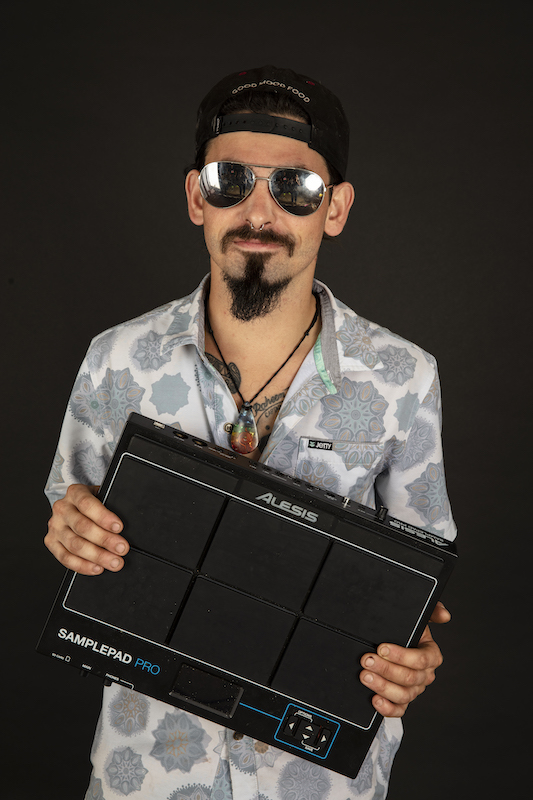 Style: “I’m a chameleon, pretty much. Matt Stock called me a child of the universe.”

Origin story: “The first time I played I was two-ish, and the first time I ever picked up sticks was a pair of wooden spoons. I woke my mom at 10:30 at night hitting pots and pans. It scared the crap out of her, but she thought I sounded good. So, I got my first kit at six.” 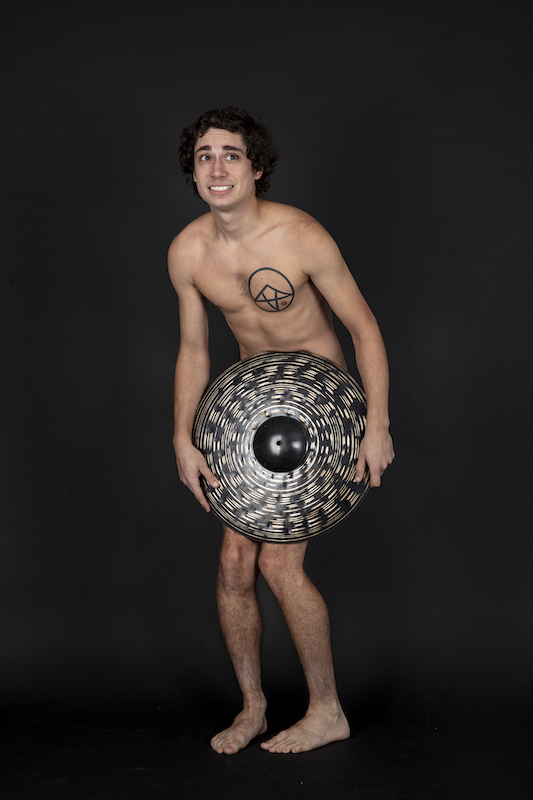 Style: “I’m a metal drummer. We do reggae, funk and stuff; but me personally, I’m metal.”

Thoughts on starting out young: “I might have been 12 when I was in the Cross Island Bridge Band. We played three- to four-hour sets, Rolling Stones and ’60s stuff like that. We did that for a few years into high school for $25 and a free meal every gig. It subconsciously taught me a lot about playing live and the professionalism of it.” 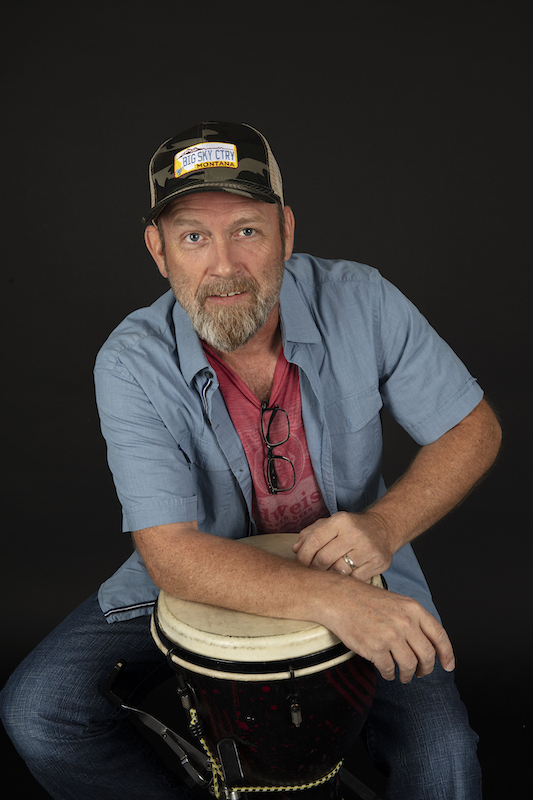 Style: Technical, with underlying elements of pipe band. “As I’ve progressed and played with more people, I rely less on technicality and let my ears do the work more.”

Thoughts on gigging around the island: “Being a drummer or musician on Hilton Head, it’s like six degrees of separation. There’s a certain transience, so I’ve played with an awful lot of people. It’s like surfing the crest of a wave. You don’t know what’s going to happen.”

The Wrong Way ’Round

While they only make up about 10 percent of the population, it turns out that southpaws are highly represented among drummers. Ringo Starr, John Bonham and Phil Collins are just a few lefties in the rock pantheon. Both Chip Larkby and John Ruxton are both lefties, something they learned about each other during this interview.

You’d never know it because most of the time drummers are forced to play righty.

“For me it was convenience,” Ruxton said. “When you’d go to a gig and share someone’s kit there were no options.”

And maybe there’s something to the distinctive sound a left-handed drummer brings to a band. It seemed to work out okay for the Beatles, after all.

In fact, if you ask Chip Larkby, the challenge of playing right-handed adds to the dynamic. “That millisecond of thinking causes a slight delay in the timing of how things flow,” he said. “Because of that, there’s a very distinctive thing that is Ringo. If not for that distinctive thing, the Beatles would probably not be the Beatles we know.”