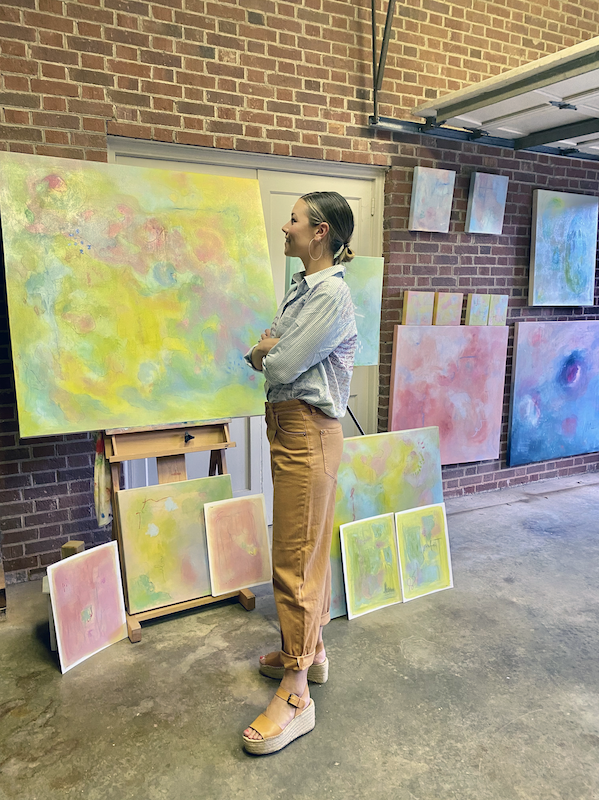 On Inspiration and Art with Katie Moore Howson 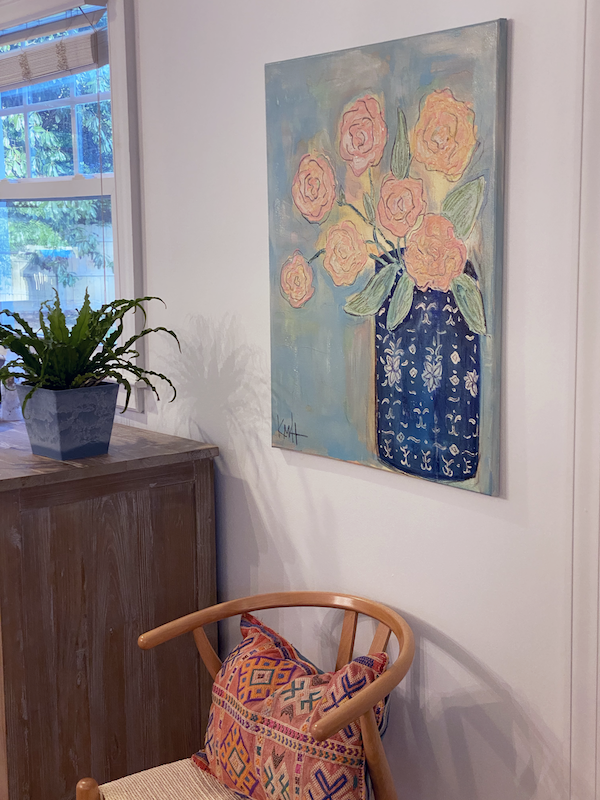 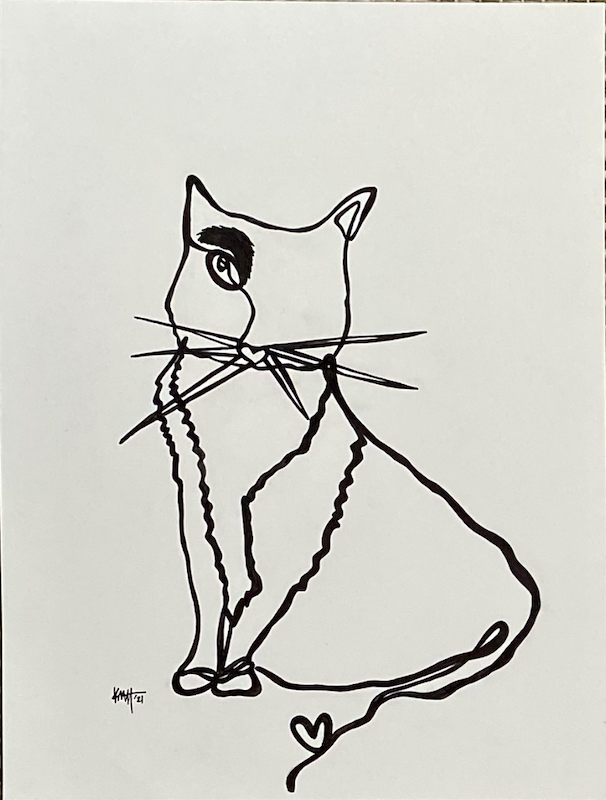 In late August, Katie Moore Howson released her first collection of paintings, Out of Hiding, a visual and symbolic nod to the journey she has been on for the last 18 months. Born of necessity and soon the salve to her wounds, painting became Howson’s saving grace. In retrospect, this is where she was destined to be all along.

“One color, one shape, one item … all can be the inspiration for something bigger,” Howson said of the process behind her art and the trek that brought her to where, and more important, who she is today: an artist, a writer, a mom, and a wife, to a guy named “Art.” What are the chances?

Raised in Charlotte, North Carolina, Howson headed to New York City following college. She had “… enough savings to live for, like a week,” she said, and quickly had to find a job. She landed a gig with MTV and was off and running during an era that was like the “Wild Wild West” in TV land. An MTV producer took a chance on Howson, and she soon found herself in the thick of it all—a high-energy dream job as the creative director behind the Video Music Awards and on-air promotions for the station. “I worked my ass off for four years,” she said. At MTV, Howson learned she was “an abstract thinker and loved taking a story and relating it to the human experience.” But one day, “I just stopped and thought, ‘I need a nap,’” she said.

Howson soon left New York “exhausted and lonely,” returned to Charlotte and found her way to Wray Ward, a creative agency that allowed her to flex her abstract muscle and really build her creative portfolio, handling the creative direction for national brands like Sunbrella, Velux, Moen, and Palmetto Bluff.

After four years, she parlayed her role into a freelance position, giving herself a little more freedom from the desk and the office atmosphere she’d felt tied to for too long. Along the way she got married and, a year later, pregnant. She was in her third trimester when the pandemic hit. March 2020 forced everyone to slow down and re-assess, but as she slowed, Katie also began to unravel as she realized she would be having a child amid it all.

Soon, as a new parent, she was overcome by a lingering anxiety that forced her to continue to push back re-entry into the working world. When she did begin to take on clients and work again, she had a serious panic attack. It scared her. It scared her husband. It scared her mother. Something had to change. 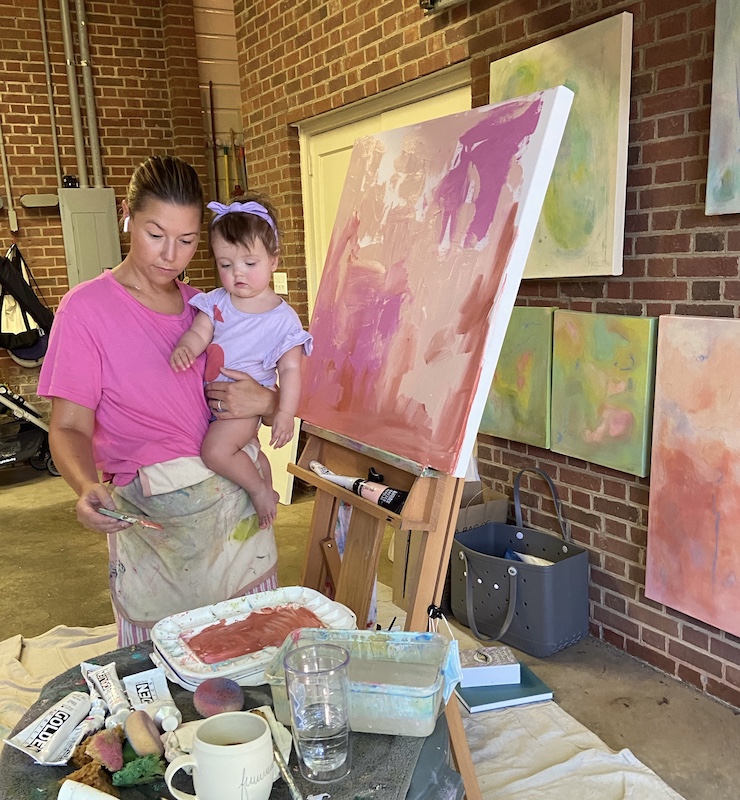 Putting brush to canvas was her therapy and began to steady her mind. “I have always made art,” Howson said, but this time was different. This was about putting her natural ambition and drive aside and doing something that soothed her—something for her. In the “rat race” of the agency world, Katie was always creating for clients but never quite comfortable around her colleagues whom she referred to as “the real artists.”

It was a request from her sister-in-law, Maddie, that put Howson’s current path in motion. Maddie asked her for a large, abstract painting to represent a hard time she had just experienced.

Howson found that channeling Maddie’s feelings, and her empathy for Maddie became therapy. And soon she was thinking of herself through the process. As more requests came in to capture a moment in time—a new puppy, a family, childhood, growth—Howson grew as did her confidence in her craft. “I realized … this is how I want to tell stories now,” she said.

Howson starts with a word or a phrase that is on her mind and says that prompt always leads her somewhere. As she began to take on more commission work, she found joy in interpreting someone else’s story. But soon it was time to tell her own.

The idea for her inaugural collection, Out of Hiding, came in the middle of the night, and Howson decided to take a break from commissions and create it. “I had convinced myself that I needed a certain number of years of experience or this many social followers before I could create a collection,” she said.

Gratefully, she was wrong. Utilizing her network and “new relationship with social media,” Howson established her creative voice on Instagram, launched her collection there and sold every single piece.

So, what is next for Katie? New studio space that is not in her mother’s garage. A second collection premiering before the holidays. Time with her sweet daughter Lenoir, labradoodle Bruce (yes, named for “The Boss”), and her husband, who so fittingly is named, Art.

And the realization that anything is possible with vision, empathy, and passion. Howson named one of the pieces in her first collection Yes My Love, You Can. And, she has.