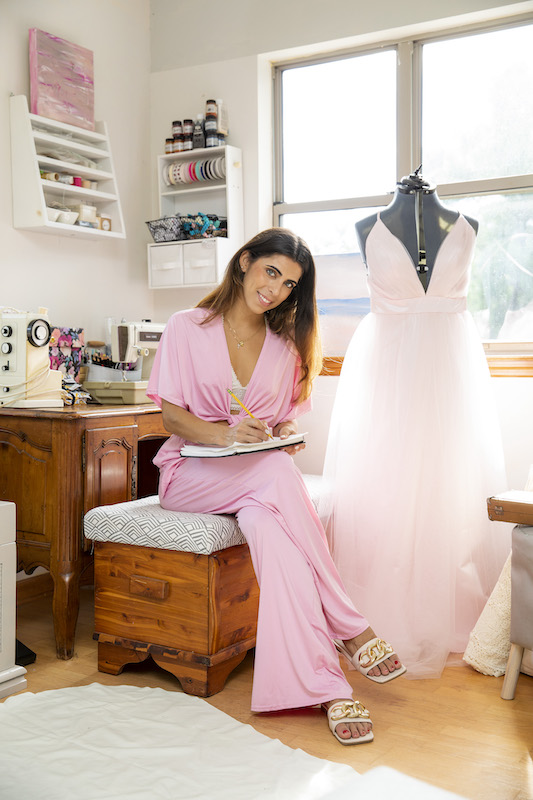 Two Lights, One Stand
Apart from being somewhat sexist, Mark Twain’s idiomatic expression the “clothes make the man” is fashioned in truth: People are often judged according to the way they are dressed.

“We’re raised to not judge a book by its cover,” began Susan Rafetto of Peace by Piece Boutique, “but we do. What we choose to wear tells the story of what is inside of our book. It allows others to kind of see the narrative of our personal story.”

Rafetto says she has always expressed her own style, whether it was as a rebellious youth wearing black leather pants to church or standing out in high school, mixing and matching a variety of styles. “I almost got best dressed in high school but lost out to a girl on student council. It was rigged,” Rafetto joked.

Agreeing with Rafetto, “slow fashion” designer Gioia Di Bartolomeo said, “Fashion is the face you show to the world.” Di Bartolomeo, too, was drawn to self-expression through clothing, as well as to craftsmanship, at an early age. “I was home schooled all the way through to college using the Waldorf method. I learned silk making, embroidery, wood carving. Crafts were part of the curriculum. To activate creativity, we started the day with singing.”

Equally influential, Di Bartolomeo’s grandmother was a skilled embroiderer. “She would make the most intricate doilies.” After Di Bartolomeo graduated from college, she studied under a clothing designer in Varenna, Italy and learned more about the clothing industry.

Both Rafetto and Di Bartolomeo have worked hard to get to where there are now. Putting countless hours into their wearable art has not been easy or financially as comfortable as their clothes. And yet both knew, at some point in their lives, they needed to go all in and pursue a career in sustainable fashion.

“When I was younger, I did not think it was possible to do this. I thought I had to go to fashion school, apprentice and then work for a big company. But I knew I needed to work for myself,” Di Bartolomeo said.

“I always had a full-time job to support my art,” said Rafetto, who also paints custom pet portraits as well as her upcycled garments and accessories. But on the day of the Uvalde shooting, she began questioning her impact in the world. Rafetto had already experienced an emotional day at work, and she found herself asking, “Who am I? Who am I really making happy?” 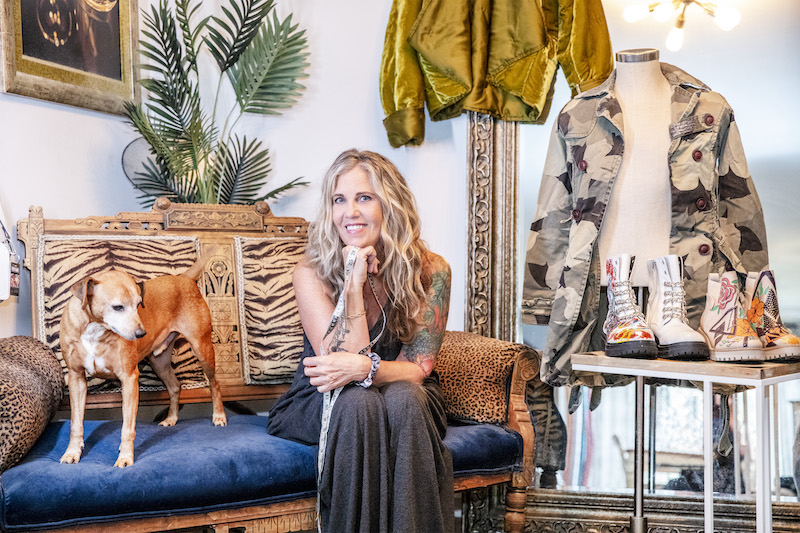 And then there were the environmental ramifications. The negative impact fast fashion retailers like SHEIN and H&M are having on our environment and certain populations is something Rafetto and Di Bartolomeo literally wear on their sleeve.

“Fast fashion is so unregulated,” Rafetto said. “H&M can make as many black T-shirts with a pocket as they want, and if they don’t sell the shirts, they go to a landfill or into a fire.”

In addition to environmental concerns, for personal reasons, Rafetto and Di Bartolomeo are committed to upcycled fashion. For Rafetto, after a series of signs, she realized she was meant to help people. She has transformed several meaningful garments into lifetime pieces and has started offering the Take Five Fashion Show (a concept she is pitching to HGTV).

“Take Five Fashion Show is an intimate gathering where you shop your own closet, give me five items of clothing, trust me to recreate, and then sit back and be surprised at your personal fashion show,” Rafetto explained.

For Di Bartolomeo, it is about preserving craftsmanship and investing in yourself. “The fashion industry sometimes reminds me of people swiping right on Tender and just moving on to the next thing. We should be investing in pieces that last a long time and are humane in origin and not made in a sweat shop,” she said. “I understand money can be a concern for people, but you do not want a watered down uniform of what everyone else is doing. When you home in on your personal style, you are far less influenced by what other people are doing and promote your own individuality instead.”

Di Bartolomeo concurs. “I started with a Brother CS70001. Get to know the different types of techniques and the different types of textiles. A beginner can start with cotton and then progress to silks and knits to learn about the right needle and the right thread so the fabric will not snag, bunch or be difficult,” she said. “You can also begin by making pants into shorts and maxi dresses into minis.”

Becca Edwards is a freelance writer and owner of Female IQ (femaleIQ.com).