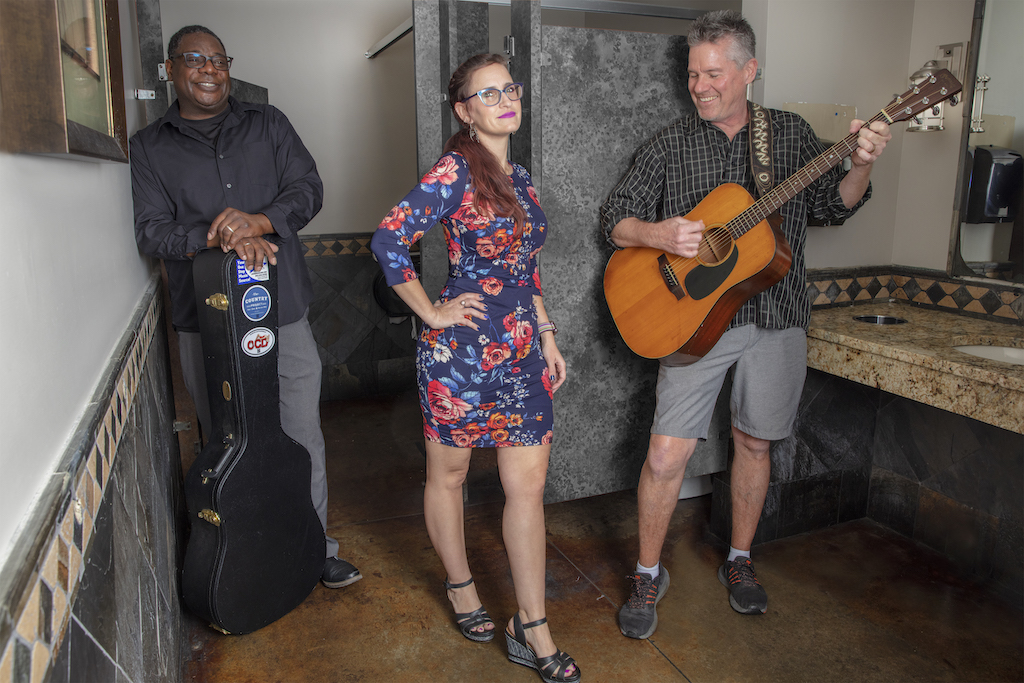 Biggest compliment you’ve ever gotten from a fan?
JO: Peggy Nicholas paid us the biggest compliment, in my opinion. She says that she and all her friends live for Friday nights at the Okatie Ale House!
SE: Every compliment means something special. We love them like they love us!

What do you sing in the shower?
JO: I don’t sing in the shower. I prefer to crank tunes and jam out!
SE: My new favorite go-to shower song is “Good Kisser,” by Lake Street Dive. Amazing lead vocalist.
UM: Nothing. I’m listening and learning.

Most requested song at shows?
JO: Folks love it when Savannah does Dua Lipa and Lizzo!
SE: “Brown Eyed Girl,” but it’s okay because we “don’t know it.”
UM: “Gimme One Reason”

Favorite artist?
JO: Always an Eric Clapton fan, but Jude Cole is the most underrated and under-appreciated singer, guitar player, and songwriter of all time.
SE: Lake Street Dive

Place you go to get away from it all?
JO: Key West
SE: My car. Isn’t it everyone’s self-therapy spot? Just me?
UM: My wife’s side, anywhere on earth.

Who would star as you in the epic retelling of your life?
JO: Randy Travis
SE: Please be Kristen Wiig!
UM: My son

First instrument you learned to play?
JO: I’ve only ever played guitar. I try drums and piano, but not well.
SE: None. Does half-*ss tambourine count?
UM: Drums

Song you were thrilled to finally master?
JO: I had a student one time that wanted to learn the guitar solo for “Hotel California,” so I had to master it.
SE: “Bobby McGee”
UM: “Broon’s Bane,” Rush

What do you wish you knew more about?
JO: I wish I knew more about working on cars.
SE: The afterlife. Isn’t it just the most intriguing question?
UM: How to be better.

What animal do you most identify with?
JO: My old dog Jude, who was a Weimaraner
SE: Lioness. Protective. Nurturing. Proud.
UM: Kangal

If you got super famous and had to change your name, what would your new name be?
JO: I like my name and don’t plan on ever changing it. Thanks, Mom and Dad!
SE: Well, they call me Savannah E nowadays. Can’t imagine it being anything else.
UM: Stephen Zephner III

What famous musician would you love to play/sing a duet with?
JO: Would love to do a duo with Eric Clapton.
SE: Johnny Lang or Justin Nozuka
UM: Stacy Lattisaw—perfect combination