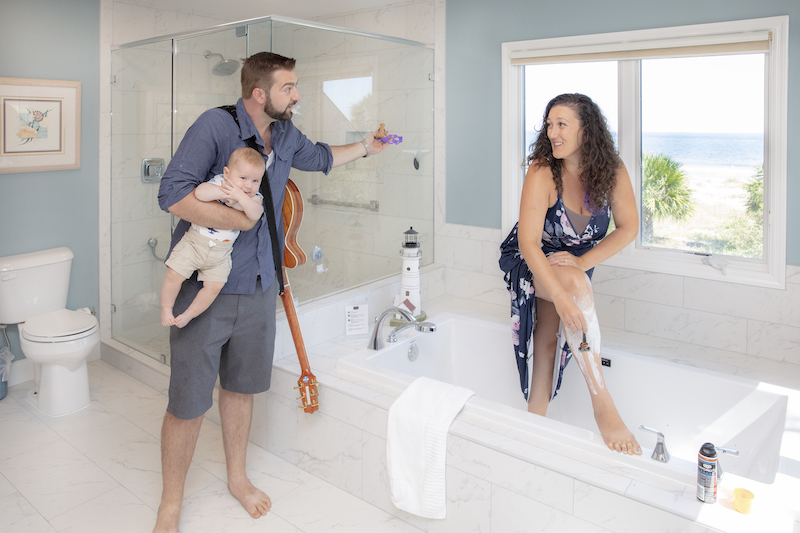 Most underrated song that, in your opinion, should be a classic?
LC: Probably a song off the B side of Stadium Arcadium, RHCP
CR: “You’ll be in My Heart,” Phil Colins

Biggest compliment you’ve ever gotten from a fan?
LC: Your wife has an amazing voice. And she does, fo sho.
CR: A song I sang took them back to their favorite memory or place.

What do you sing in the shower?
LC: “Baby Shark”
CR: Opera or jazz

At what venue do you most like to perform?
LC: The Westin & OTD
CR: Tiki Hut & Dunes House

Most requested song at shows?
LC: We often get asked to play our favorite song.
CR: “What’s Up,” 4 Non Blondes

Place you go to get away from it all?
LC: The bathroom
CR: Saint John, USVI

Who would star as you in the epic retelling of your life on film?
LC: The Situation from Jersey Shore
CR: Sandra Bullock

What do you wish you knew more about?
LC: Iron Man’s suit in Infinity War. I feel like we skipped a couple of steps there from the last movie to Infinity War. I just don’t understand why we didn’t take a few minutes to explain. I mean, it is a long movie, but we’re talking about a few shots of what’s- his-face in his garage, tinkering with some outer space or Wakanda toys and those little robots running around cleaning up spills. Bing, bang, boom. All we get is him tightening (an already tight) jacket, and little things come from his chest and cover his body?! AND they can separate from his suit and shoot laser beams?! Just look at Dr. Banner’s reaction. Homie was blown away. AND he (The Hulk) spent the last few years on ANOTHER planet and helped Thor release a demon fire monster kill his sister, destroy Asgard and get his teeth knocked in by Thanos. It was a tough time for everyone. Really, but I digress. That and global warming.
CR: Playing piano

What animal do you most identify with?
LC: I am an animal.
CR: A well-pampered house cat with a hefty inheritance

If you got super famous and had to change your name, what would your new name be?
LC: Mr. Maybe
CR: Reno Sweeney, ha, ha!

What famous musician would you love to sing a duet with?
LC: My wife
CR: Jason Mraz