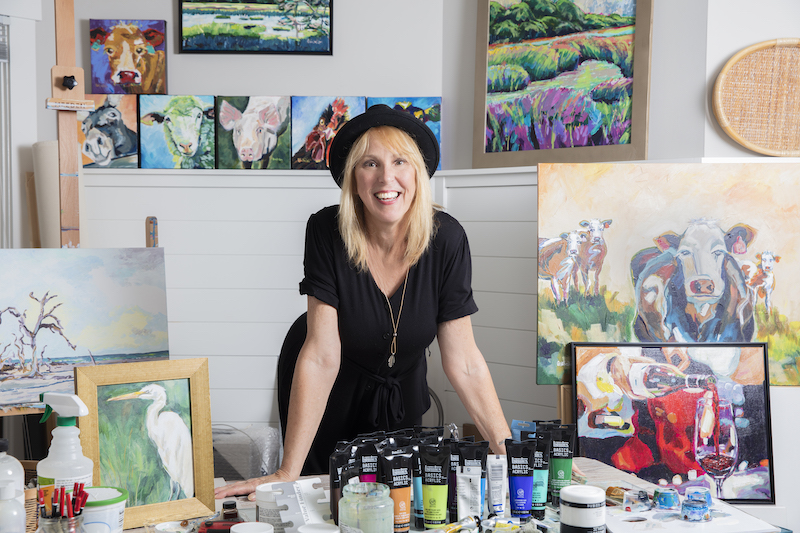 Art That Doesn’t Match the Sofa: Get to know Robin Ross and just say no to boring beige 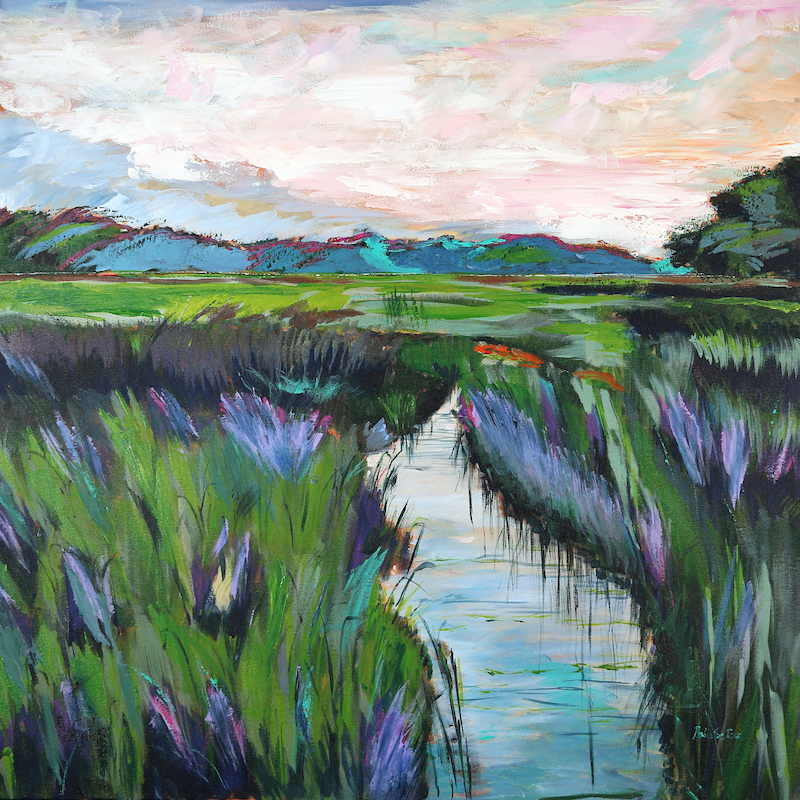 There are two ways of seeing the world: the average way and the artists’ way. To the average person, a tarnished silver pot is just that: a tarnished silver pot—an object that maybe sits on a table or gets stashed away in the attic, largely unnoticed and unappreciated. Crawl inside Robin Ross’s brain, and suddenly that same pot transcends its concept or potential use and comes to life in a celebration of contour and color.

“I see the beauty in normal, everyday things,” Ross said. “We’re used to flash and glitter everywhere … but there is beauty in something tangible and something simple. The artworks I like most are paintings of things you see every day.”

Ross is a relative newcomer to the Lowcountry art scene, but she is no stranger to the world of art. After a lifetime as a performing musician, when Covid granted her some extra time at home, her passion for painting (a talent she stumbled upon in college) was rekindled.

Originally from Ohio, Ross attended Kent State University. “I was always into the creative stuff. My mom attended the Cleveland Institute of Art, and at 91, she’s still a watercolorist. My grandmother was a musician, and I had piano lessons at six years old. So, I thought I was going to be a classical piano performance major—for one minute,” she said with a laugh. “I got accepted into college for that but then discovered at 17 years old, my first time away from home, I just did not have the self-discipline to sit there for 12 hours [a day] to become a classical piano performance major.”

Next, Ross’s roommate, who was an art major, got mono. “She was sick in the bed, crying, with projects due. So, I helped her finish them. It was only one or two, but I was like, this is cool!” Ross said. “It was another avenue for the creativity that somehow has to come out. I changed my major to art and graduated with a B.F.A. in visual design.”

Not quite sure how her diploma would translate in the job market, Ross went on to earn a teaching degree, after which she taught elementary art for a year. It simply wasn’t for her, she admitted. “I was so gung-ho I went to the YMCA with the idea of opening an art school. But at $5 a kid, it didn’t pay the bills. So, I had to go get a ‘real’ job,” she said.

She moved to Virginia to be near family and got back to her musical roots, auditioning for a band. Performing Pat Benatar’s “Hit Me With Your Best Shot,” she was hired and went on the road, supporting herself as a musician and working various day jobs to make ends meet.

Along the way, on the twisty-turny road of life, Ross had her share of challenges and heartaches, including being widowed twice. She moved to Hilton Head Island from New Jersey when her second husband, Ron, who had been diagnosed with a rare form of Leukemia, suggested moving south. After his passing in 1998, Ross found love again, three years later marrying her current husband and musical partner, Greg Ross. You can catch the Rosses at North End Pour House Wednesdays from 6:30 to 9:30 p.m. and at LuLu Kitchen Thursday evenings from 6:30 to 9:30 p.m. 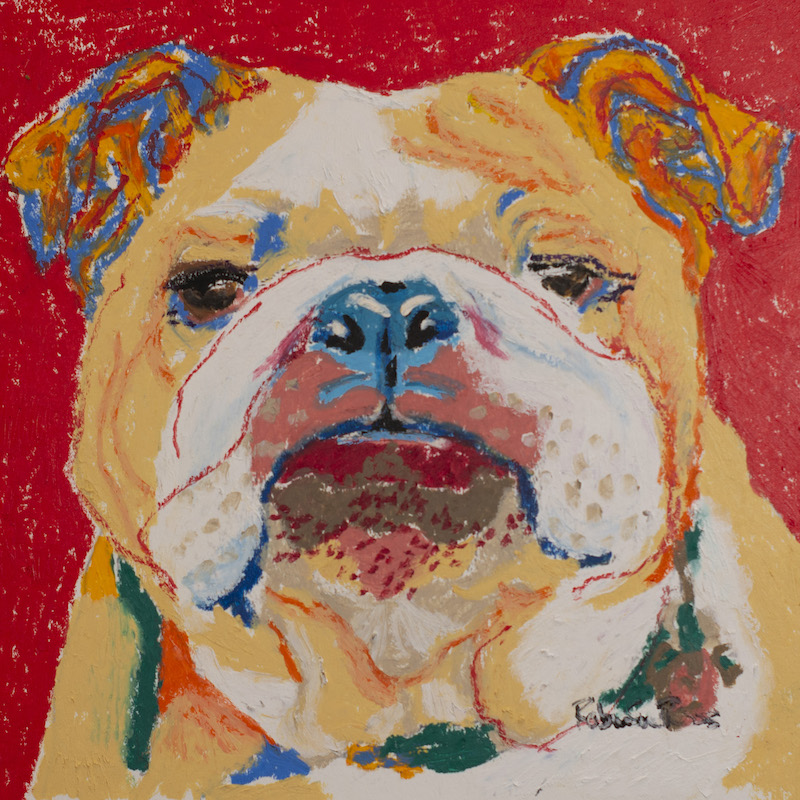 From musician to artist

While still a performing musician, Ross is in transition mode. “I’m trying to phase out of the music just a little bit. Greg is gearing towards a tasteful cocktail piano gig, while I’d like to focus more on my art. But we’re still pretty busy locally with our music, performing in bars and restaurants three to four nights a week as well as providing entertainment for corporate events and resorts.”

Picking up a tube of paint from her table, she said, “This little wrinkly tube of paint lived in a box in the attic of every home I’ve lived in for 43 years. It was upstairs with these ancient old things,” she said, pointing out brushes, more tubes of paint, and other art tools, some of which were handed down from her mother. “Some of these things are 60 years old. I just had them in a box.”

Ross’s impressionistic style is enhanced by her bold, imaginative use of color. And while she can paint anything that strikes her fancy, her specialties are landscapes and animals, including pets and wildlife.

One of her biggest commission items to date has been pet portraits, which is where it all began. “When Lucy died, I went upstairs and got the paints.” By the way, Ross is our editor-in-chief Maggie Washo’s stepmom (and for any new readers, Lucy was Washo’s beloved Bernese Mountain Dog.) “That’s when the floodgates opened. It started with the Lucy portrait, and then everybody and his brother wanted one of their pet. So, I was doing a bunch of those, and they were fun.”

Next, she painted a series of barnyard animals. “I don’t know why I went off on that tangent,” Ross said. “No one’s going to buy the cows or the ‘demonic’ goat…. It would be wonderful to say, I only paint what I love, but I’m trying to make this a career of sorts. I want to get paid for it.”

Therein lies the artist’s dilemma. “You don’t want someone to buy your art because it matches the slipcovers on the sofa. But sometimes you have to do that.

“Do you have anything in a beige?”

“I would want people to hang art on their walls that takes them someplace or moves them somehow or reminds them of something—like listening to a favorite old song—rather than buying a painting that matches their sofa.”

Ross typically starts with a photo. “Everywhere I look, I’m like oh! I want to paint that. I have a collection of photos on my phone and my camera—probably a year’s worth of work,” she said. “Then I do a pencil sketch or value studies to determine where darker colors are going to be. But I don’t always do that. Sometimes I’ll just sketch right on the canvas and block in big areas of color. It’s layers and layers.”

Ross says she enjoys the process but it’s never easy. “When you’re looking at this big, empty white canvas and you want to portray a mood or an emotion, it’s a struggle to translate it. So, you do remove yourself from the world. When you’re focused on it, all the stuff that you would be worried about is somewhere else. The hours go by and somehow, all of a sudden, it’s 4 o’clock in the afternoon and you have this thing that’s finished.”

Ross insists that anyone can learn to paint if they have an interest. “Music and art are both creative expressions. It does take a talented individual to become good at their craft, but the fundamentals, anybody can learn,” she said. “If you are good at looking at something and being able to translate it so that it looks like what you’re looking at, that’s the talent part. But anybody could become proud of what they do. When I start my Zoom art school, it’s going to be in the evenings where there will be wine involved, of course. We’ll do it step by step.”

Meanwhile, Ross encourages you to begin noticing what’s around you. “The next time you go walking and you look across the lagoon, really notice how beautiful it is. Look around with a sense of permanence. Take a photo,” she suggests. And if you’re not up to painting it yourself, get in touch. While she won’t guarantee it will match your sofa, she promises to bring it to life!

To see more of Ross’s art or request a commission, visit robinsueross.com.