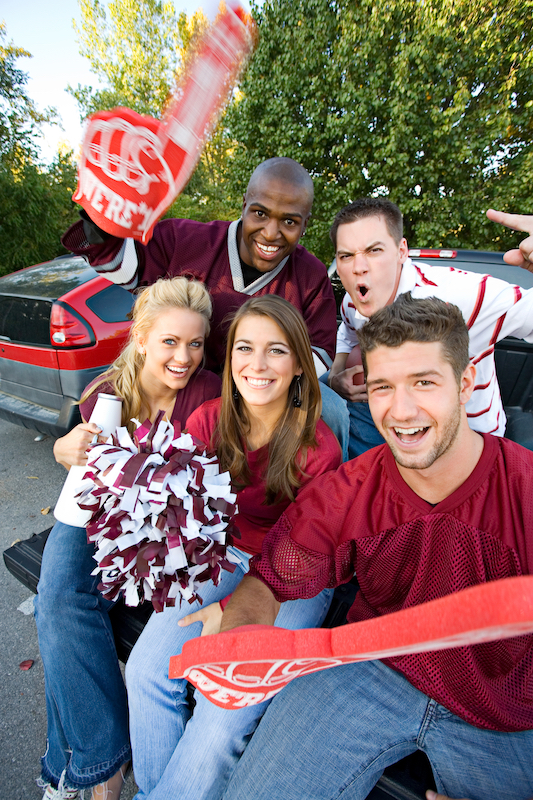 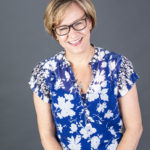 Special to CH2/CB2 Magazine
We already know Hilton Head Island and the surrounding Lowcountry is where the masses migrate for good food and that everyday vacay feel. As the summer winds down, cooler breezes kick up, and oysters steal the show, we hear another fight song calling us together, and we start clamoring for kickoff. It’s more than just […]

We already know Hilton Head Island and the surrounding Lowcountry is where the masses migrate for good food and that everyday vacay feel. As the summer winds down, cooler breezes kick up, and oysters steal the show, we hear another fight song calling us together, and we start clamoring for kickoff.

It’s more than just the game. It’s big groups and batch brews; it’s 10 kinds of dry rubs for your boneless wings and fisticuffs over which pizza crust is an abomination; it’s fantasy leagues and fried things. It’s football, friends, and food, and in your hunt for the perfect local haunt, C2 is here to help you find your people.

Street Meet – Cleveland Browns
Cleveland rocks. So does Street Meet, the island’s “Brown Backers Bar,” known for its food reviews far beyond the team on the TVs. We already know Hilton Head is the capital of Ohio (#OHHIO), but nowhere does this climb to a roar with as much fanfare as Street Meet. An award-winning menu covers everything from homemade sauces to soul food fusion chipotle-ranch chicken baskets, to stadium faves like gyro and a hot pretzel or homemade chips. Street Meet gets its name on Sundays, meeting somewhat in the street as the festivities pour outdoors to tailgate, filling the barrel barbeque with slow roast. Patriot owned-and-operated, the owners take pride in their veteran support through Honor Our Heroes. This American tavern with Americana cuisine is as passionate about their community service as their selection of American whiskey, bourbon, and craft-brews in addition to American-made apparel and memorabilia.
streetmeethhi.com

Mangiamo’s – Ohio State
“Welcome in!” as their tagline states, to the Italian eatery known primarily for its pizza. The energy in the house is a mix of height-of-the-summer high fives and drink clinks, super-friendly wait staff, and a big bucket of Buckeye fans, most of which are sharing a pie. On a scale from extra sauce to extra serious about the game, Mangiamo’s has a Buckeye nook and gift shop and an anti-Michigan restroom. Of gamedays, they state, “For noon games, we open three hours before kickoff, and for night games, the kitchen closes at half-time, and the bar closes immediately after the game.” Mangiamo’s serves up sports bar spirited specials like half-price spaghetti Wednesdays and happy hour drink lists for a party of “pizza, pasta, and pigskin.” But there’s no question pizza is their calling card. So much so they keep right there in their URL:
hhipizza.com 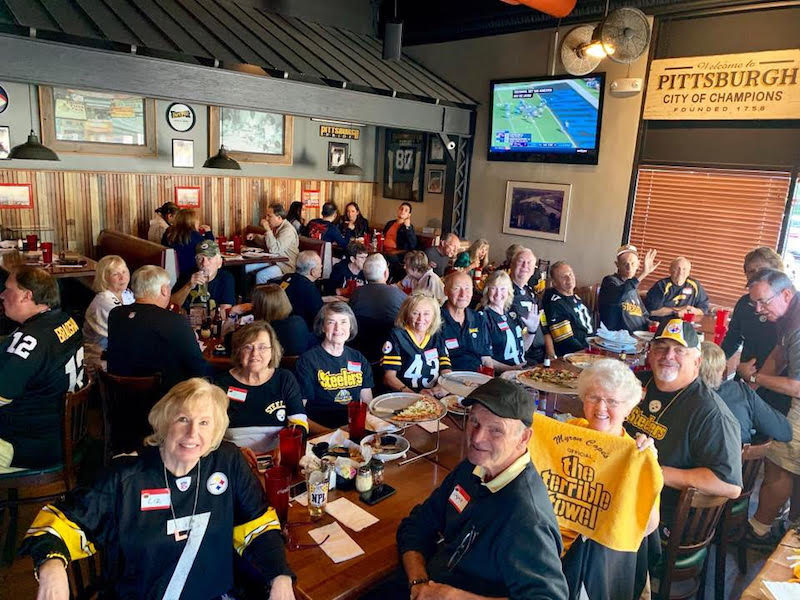 Giuseppi’s – Pittsburgh Steelers
If you’re looking for the yinzer club, they’re not dahntahn; they’re over at Guiseppi’s and “serving award-winning pizza (‘and more’) since 1984.” The “and more” sets the tavern tables with a large, family-sized servings of “the freshest and most authentic ingredients – sauce is made fresh from California tomatoes. The dough is made daily at our Hilton Head and Bluffton restaurant locations, and the best quality Italian cheeses top our pies.” The menu goes full bar (16 beers on tap) and full Italian, with food running almost second to the Pittsburgh-native owners’ Steel Town roots. This Steeler Nation HQ has memorabilia on every wall and window, making no secret of the “Stiller” black and yellow that reigns supreme on 14 TVs broadcasting the Big Ten Network, Direct TV, and NFL Sunday Ticket! Yinz gotta git over der and siddahn ta eat (or just call for delivery from their HHI or Bluffton locations).
giuseppispizza.com

CocoNutz Sportz Bar (Hilton Head Beach & Tennis Resort) – Baltimore Ravens
Not just the four-year repeat winner of Wingfest (and People’s Choice to boot), Coconuts’ “must-try” list is long, and possibly topped by their namesake CocoNut Shrimp Dinner. Whether your taste runs prawns or pizza, beer or bourbon, or somewhere in the middle with a rich and thick Blue Beach Burger, CocoNutz is serving what you like, especially if it’s a Ravens win on their 23 HD TVs including a dual projector wall of sports. Nutz is a pure seaside resort atmosphere with pool tables, dart boards, and a host of other games and nightly promotions. Not just a Sportz bar (with a Z), it’s an island watering hole where businesses and beachgoers flock for food, fun, and a little Maryland football (to go with the crabcakes).
hhibeachandtennis.com/dining 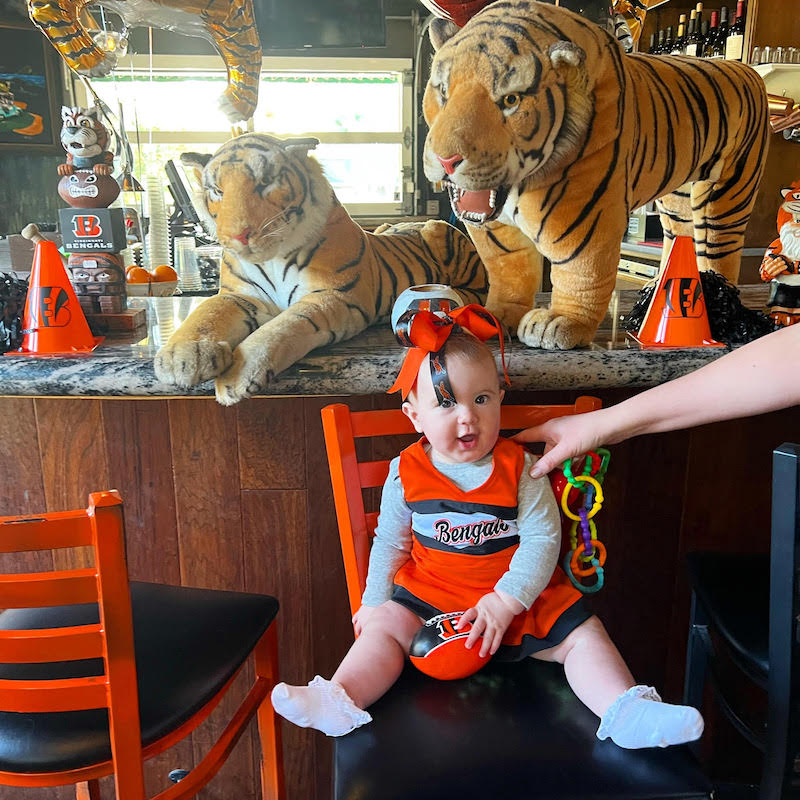 Rockfish – Cincinnati Bengals
“Cincinnati is a German town” said the owner of Rockfish when describing the German fare found on their menu including “goetta omelets,” (goetta being a sort of German scrapple for those not in the know), “Big Boy burgers with tartar, and Graeter’s ice cream.” Come by for the game, and you might catch a former Bengals QB who lives on HHI and catches the game at Rockfish on occasion, including last year’s Super Bowl. A unique offering at Rockfish is their “season ticket holders,” meaning you can purchase your seat for the season, and you get the name of your choosing on a plaque on the back of your reserved gameday seat. Talk about regulars. Proceeds go to the Kenny Anderson Alliance (the Bengals QB’s Cincinnati based charity).
rockfishhhi.com

Reilley’s Grill & Bar – New England Patriots
If you haven’t heard of Reilley’s, you’re new here. It’s an island staple, pulling drafts since 1982, way before the Patriots 2002-2019 never-gonna-stop sudden uptick in world domination. “If football is on, it’s on our TVs,” proclaims this Boston brew pub, speaking of 16 TVs which you can watch indoors or out on a pet-friendly patio. Voted “best of” for both happy hour and the brunch menu, the ambience here is a cut above in true Bean Town style, as is the menu of sizzling steaks, fresh seafood, and pub sandwich creations. In-season, call about the live music set list playing Thursdays through Sundays or about reservations.
reilleyshiltonhead.com

R Bar & Grill – Buffalo Bills
Often referred to as “your bar,” playing into the hometown feel of this Bluffton favorite just off 278 (Sheridan Park), R Bar and Grill is where everyone knows your name, thanks to the neighborly vibe, regulars, and friendly wait staff. It’s also where the Bills stickers on car windows are prolific in the parking lot. Weekend drink specials and family fun with cornhole and video games keep fans entertained in an open air environment where the rustic garage door wall opens to outdoor seating complete with fans and fires, depending on the local temps. 16 flat screen TVs flank a mouthwatering menu featuring house made, slow roasted roast beef on a from-scratch kimmelweck roll with a dollop of horseradish and au jus—so perfect you might be tempted to sneak in as a Steelers fan. All are welcome to the one-stop-shop for everything from Philly Cheese to Meatball Parm Hoagies.
rbarbluffton.com

Cheap Seats – Come One, Come All
Haven’t found your team yet? At Cheap Seats, the colors run together for every possible clubhouse favorite you could hope to find, both on the island and in B-Town too. Garlic fries, loaded nachos, fried meatballs, wings, Reubens, Cubans, Phillys, quesadillas, chicken parm, gyros, chilis, sammies, even fish tacos, bruschetta, or jambalaya, and those are just the highlights. Their page-turner menu covers everything from full-course meals to snacks so stadium-worthy you can almost hear the staff yelling “hot dog” as they pass your table. Well-rounded is the name of their game, as in their tag that reads, “Music, Melts, and Martinis.” A fave of fans who want a little bit of everything and everyone at their table, with emphasis on music which you can keep up with on their socials for who’s playing Cheap Seats and when.
cheapseatsrestaurantgroup.com

The Power of Music

Eminem’s “Lose Yourself” crescendos and you find yourself getting lost. Simultaneously, fingers and head start to snap in keeping with the beat. You feel compelled to rap and, out of nowhere, you start singing lyrics you did not even know you knew. Next up, Ramin...